For large applications, AWS recommends a multi-account structure to create a clear separation of roles and resources. In this post, I will be talking about AWS CDK v2 and demonstrating how to deploy a simple multi-account architecture with AWS CDK v2.

A common multi-account strategy is to have one account for each environment that hosts your application e.g. development, test, production etc and another account used to control application deployments into those environments.

With AWS CDK, deploying these complex architectures is made simpler and more manageable. With the latest version CDK v2, cross-account deployments can be done completely transparently, without having to switch between accounts and manually trigger pipelines.

To deploy CDK applications into an AWS account, the account first needs to be bootstrapped with the resources that the CDK needs to perform the deployment. The CDK CLI provides a command that automatically provisions these resources: cdk bootstrap. Running this command will create a CloudFormation stack that defines the required resources. By default, this stack is named CDKToolkit. It includes an S3 bucket for storing CloudFormation templates and other files, and IAM roles that have the permissions needed to deploy AWS resources.

You can use the same bootstrap resources to deploy your applications alongside each other. However, version mismatching and workflow differences may mean that a different approach is required. To solve this problem, the CDK CLI allows you to set a “qualifier”, which is just a string added to the names of all the resources in the bootstrap stack. It lets you avoid resource name clashes with other teams, giving you your own bootstrap resources that stand independently. You’ll also want to change the stack name from CDKToolkit to something unique.

The second flag (--cloudformation-execution-policies) specifies the permissions granted to the role. In this case, the role is given full administrator access, which is necessary to create, update, and delete all types of AWS resources. Therefore, it is important to put appropriate restrictions on the repository that stores your CDK application, so only trusted code and dependencies are deployed.

My accounts are bootstrapped, now what?

Now we can deploy our CDK application! In this example, we’re using CDK Pipelines, which is a high-level construct module included in the AWS CDK that simplifies the continuous delivery of CDK applications. I’ve followed this how-to guide created by AWS to produce an application that deploys a simple Lambda function, and I’ve extended it to deploy to three environments, each in a separate AWS account. You can view my solution on GitHub.

In the CdkPipelineStack, I’ve defined several stages to deploy our CDK application to other accounts. Each stage contains a pre-deployment step to require manual approval before continuing. Here’s what that looks like in the AWS Console: 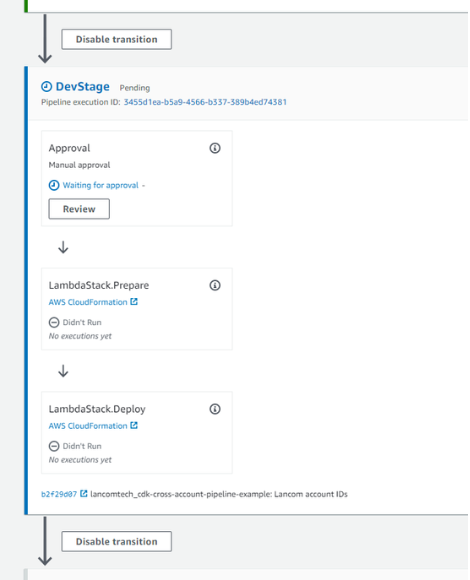 After giving manual approval, the pipeline will deploy our Lambda stack into another account by assuming the cross-account roles we created during the bootstrapping step. The entire process is completely transparent and automated, giving you fully centralised control of your application deployments, and an account structure with strong boundaries between environments.

AWS CDK v2 means you can deploy complex architectures in a way which is manageable and straightforward. Cross-account deployments can be done completely transparently, without having to switch between accounts and manually trigger pipelines. The process I suggest following involves bootstrapping, setting a qualifier, changing the stack name from CDKToolkit and then setting two trust flags. Once done, you’re ready to deploy your CDK application!

Andre is the Development Manager at Lancom Technology and leads our team of software developers. Andre has vast experience of AWS, having achieved their two professional-level certifications; Solutions Architect and DevOps and has been recognised as an AWS Partner Network Ambassador, one of only a handful in New Zealand. Hailing from Rotorua, Andre is of Ngāti Whakaue descent.

Talk to us about your Windows Server

We have extensive Microsoft expertise with our teams designing and implementing hundreds of Windows Server projects for companies of all sizes. Get in touch and tell us about your Windows Server.