Is your business stuck in the Excel hell? Stop it now! 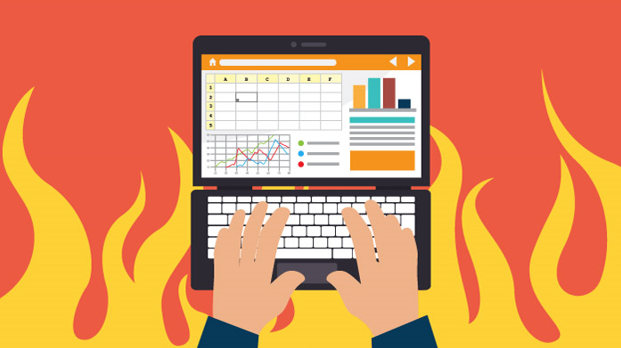 You would see it almost every day: those endless reports, those endless astoundingly complex worksheets shared around the office by the local ‘Excel Power User’, a person that usually gets paid to keep spreadsheets alive. The bigger the company, the more spreadsheets, and the more Excel gets used.

Before you stop reading OR pick up the phone to ring me, let me just make things clear: We are not here to propose that you stop using your loved spreadsheets!

We’d never advocate the banning of one of the most useful tools ever to enter the workplace, and doing so would in any event result in a massive surge of shadow IT. But… Excel Hell is real!

How it all happens

Excel hell arises because of several factors, but probably the most prominent is that Excel is so capable of solving so many tasks for everyone. It is also almost infinitely flexible and can be used to do mind-boggling things.

But these very strengths are also Excel’s biggest weaknesses. Ask 100 people to solve the same problem using Excel and there will be 100 results, none of which resembles the other. Is there a mistake in there somewhere? Probably, but good luck finding it.

The flexibility of the spreadsheet also means it can be fiddled with to give the ‘right’ answer. Whether that fiddling is just a mistake or it is deliberate doesn’t really matter. What does is that the output can’t necessarily be trusted. Uh oh – now, which one of those hundreds of reports do you think is trustworthy…and which one not?

Yes, that’s right! Have I got your attention?

Now stop and think about how much risk your business is exposed to if 88% of your data has errors.

The light at the end of the tunnel

Now, advocating throwing out Excel because it is so useful is clearly not the answer. But what is part of the answer is to seek better tools for those areas where, well, there are better tools. That means offering alternatives.

Wherever reporting is concerned, for example, proper business intelligence tools are likely to be a far better bet.

Auditability and the presentation of information in visual, accessible ways is probably going to mean those reports get accessed and used far more often.

Microsoft’s PowerBI and PowerApps are great examples, with users of these technologies often realising that the hard work that goes into creating a report goes much further when the recipients actually read, understand and take action based on the information contained therein.


So, is Excel the root of all evil? Absolutely not!

But is it the right tool for everything it is being used for today? That’s another ‘absolutely not’. Look for the problems which are characteristic of Excel Hell (that could include rolling eyes, unopened attachments and zero feedback on that report, or it could be that guy who has been moaning about the useless spreadsheet for as long as anyone can remember).

And here’s a yardstick, too. Excel is really good at this one thing: entering, storing and analysing small data sets – the rest belongs in a better application.